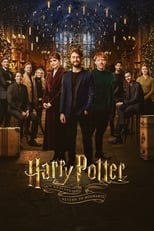 Cast members from all "Harry Potter" films reunite in a retrospective special to celebrate the anniversary of the first film, including interviews and cast conversations.

TAGLINE: "Welcome back to where the magic began."

No streaming sources available just yet Its release date is Saturday January 1, 2022