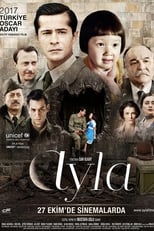 In 1950, amidst the ravages of the Korean War, Sergeant Süleyman stumbles upon a a half-frozen little girl, with no parents and no help in sight. Frantic, scared and on the verge of death, ...

Movies & shows similar to Ayla: The Daughter of War available for streaming